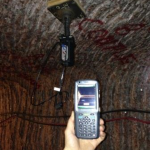 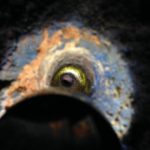 The RokTel system was used during a 2 year period at Mosaic Potash mine in Canada to carryout testing of ground support to identify broken bolts caused through shear loading. RokTel was effective at identifying bolts being subjected to shear loading, and consequently broken bolts, this ground movement was confirmed through observation holes (see picture above).

The system was hired by the mine and mine personnel carried out testing following training by i2t.