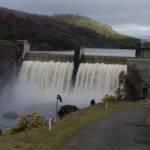 The THR project is a 12 month feasibility study on the ability to measure corrosion in steel cables used for post-stressed concrete. Design started on the monitors and sensors began in May 2012. The first on-site readings began in June 2012. This prototype phase will last until June 2013.

A pilot scheme was initiated by Hydro Tasmania to establish suitable monitoring techniques to determine steel elements’  state of health. One of the areas under investigation was steel cables in post tensioned concrete. The testing site (Meadowbank Power Station, Tasmania) was constructed in 1963 and was expected to have a range of steel cable corrosion. Meadowbank’s steel cables were only manually tested once per annum and would normally take a few days to complete.

The THR/Meadowbank project is a 12 month feasibility study on the ability to measure corrosion in steel cables used for post-stressed concrete. Design started on the monitors and sensors in May 2012. The first on-site readings were taken in June 2012. 7 prototype sensors and 2 monitors were  installed. The sensors and monitors are in IP rated protective cases and communicate via RS-485 with a custom communications protocol.

Readings are automatically taken every 24 hours and stored locally in the monitors. Each monitor has an Ethernet access point for remote access and control – the system is self-contained and thus not connected to the outside world.

The next stage would be to have a system that seamlessly integrates with Hydro Tasmania’s existing monitoring infrastructure.

This is a bespoke solution with which the personnel at i2t have had significant involvement with. We have worked closely with a team of multi-disciplined global partner organisations from inception to installation & maintenance.

The project was delivered on time and on budget. Initially, The prototype phase was to last until June 2013, but has since been extended until the end of 2013.