Non-destructive Integrity testing of crane rail restraint bolts for an underground gantry crane in a hydroelectric power station in Tasmania using RokTel was completed during June 2013. The restraint bolts anchor the crane rail beam to the host rock where greatest risk of deterioration occurs at the beam/rock interface.

Rock bolts within the access tunnel, station cavern walls and roof were also tested to identify where significant corrosion had affected the integrity of performance. Results allow the asset owners to ensure target remedial works are completed prior to an extensive upgrade. In total 75 rock bolts were tested around the cavern and access tunnel. 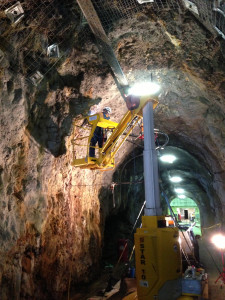 Update: over coring of 3 rock bolts in the access tunnel is currently being carried out 8th October 2013